Sleep deprivation is a phrase used to describe what occurs when someone experiences an inadequate quantity or quality of sleep, because of any reason. Sleep is just as important to our bodies as food and water, yet we often overlook sleeplessness as a contributor to our general health and well-being.

Some of the impacts of sleep deprivation, voluntary or involuntary include: 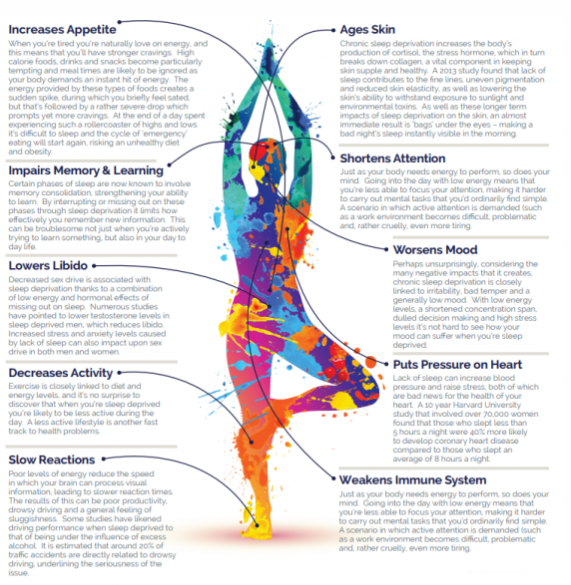 Increases Appetite
When you’re tired you’re naturally love on energy, and this means that you’ll have stronger cravings. High calorie foods, drinks and snacks become particularly tempting and meal times are likely to be ignored as your body demands an instant hit of energy. The energy provided by these types of foods creates a sudden spike, during which you briey feel sated, but that’s followed by a rather severe drop which prompts yet more cravings. At the end of a day spent experiencing such a rollercoaster of highs and lows it’s difficult to sleep and the cycle of ‘emergency’ eating will start again, risking an unhealthy diet and obesity.

Impairs Memory and Learning
Certain phases of sleep are now known to involve memory consolidation, strengthening your ability to learn. By interrupting or missing out on these phases through sleep deprivation it limits how effectively you remember new information. This can be troublesome not just when you’re actively trying to learn something, but also in your day to day life.

Lowers Libido
Decreased sex drive is associated with sleep deprivation thanks to a combination of low energy and hormonal eects of missing out on sleep. Numerous studies have pointed to lower testosterone levels in sleep deprived men, which reduces libido. Increased stress and anxiety levels caused by lack of sleep can also impact upon sex drive in both men and women.

Decreases Activity
Exercise is closely linked to diet and energy levels, and it’s no surprise to discover that when you’re sleep deprived you’re likely to be less active during the day. A less active lifestyle is another fast track to health problems.

Slow Reactions
Poor levels of energy reduce the speed in which your brain can process visual information, leading to slower reaction times. The results of this can be poor productivity, drowsy driving and a general feeling of sluggishness. Some studies have likened driving performance when sleep deprived to that of being under the inuence of excess alcohol. It is estimated that around 20% of traffic accidents are directly related to drowsy driving, underlining the seriousness of the issue.

Ages Skin
Chronic sleep deprivation increases the body’s production of cortisol, the stress hormone, which in turn breaks down collagen, a vital component in keeping skin supple and healthy. A 2013 study found that lack of sleep contributes to the fine lines, uneven pigmentation and reduced skin elasticity, as well as lowering the skin’s ability to withstand exposure to sunlight and environmental toxins. As well as these longer term impacts of sleep deprivation on the skin, an almost immediate result is ‘bags’ under the eyes – making a bad night’s sleep instantly visible in the morning.

Shortens Attention
Just as your body needs energy to perform, so does your mind. Going into the day with low energy means that you’re less able to focus your attention, making it harder to carry out mental tasks that you’d ordinarily nd simple. A scenario in which active attention is demanded (such as a work environment becomes difficult, problematic and, rather cruelly, even more tiring.

Worsens Mood
Perhaps unsurprisingly, considering the many negative impacts that it creates, chronic sleep deprivation is closely linked to irritability, bad temper and a generally low mood. With low energy levels, a shortened concentration span, dulled decision making and high stress levels it’s not hard to see how your mood can suffer when you’re sleep deprived.

Puts Pressure on Heart
Lack of sleep can increase blood pressure and raise stress, both of which are bad news for the health of your heart. A 10 year Harvard University study that involved over 68,000 women found that those who slept less than 5 hours a night were 40% more likely to develop coronary heart disease through weight gain compared to those who slept an average of 8 hours a night.(1)

Weakens Immune System
Just as your body needs energy to perform, so does your mind. Going into the day with low energy means that you’re less able to focus your attention, making it harder to carry out mental tasks that you’d ordinarily nd simple. A scenario in which active attention is demanded (such as a work environment becomes difficult, problematic and, rather cruelly, even more tiring.

Make an Appointment
Find out if a Sleep Hive Therapeutic Sleep Solution could support your sleeplessness. Make an appointment today and one of our experienced consultants will contact you.

IMPORTANT – Information provided in this sleep health article is general in content and should not be seen as a substitute for professional medical advice. Concerns over sleep or other medical conditions should be discussed with your family doctor.
1. Patel SR, Malhotra A, White DP, Gottlieb DJ, Hu FB. Association between reduced sleep and weight gain in women. Am J Epidemiol. 2006; 164:947-54.

We acknowledge the Traditional Owners of Australia and recognise their continuing connection to land, waters and culture. We pay our respects to Elders past, present and future.